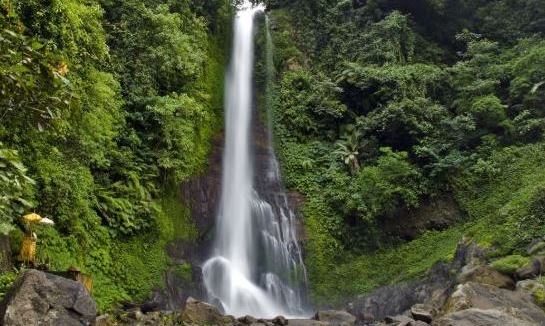 Gitgit Waterfall is a beautiful tourist destination in north part of Bali. Gitgit waterfall is located in the plateau area with the height about 35 meters and it is surrounded by tropical tree and emits the constantly natural water debit during the year.

Waterfall voice around the charming nature was amazing and it was the separate attraction which can be enjoyed by each visitor who comes to visit. There are some plantations protecting the rain forest around the waterfall and in this place we often met the wild monkey to get the water from this waterfall.

Gitgit Waterfall is one of the famous tourist destinations in Bali which is located in Gitgit countryside, Sukasada sub district and about 10 Km from Singaraja Town or about 70 Km from Denpasar. It is set at height land about 300 meters above sea level.

It is situated on the hill bank. The facilities are available at Gitgit Waterfall is consisted of the parking area, restaurant and art shop. It is not far from the waterfall place, there is a place for taking a rest while enjoy the beauty panorama of rice terrace and Buleleng Beach.

In order to visit the Gitgit waterfall, all visitors will follow the walkway down until the spot point. This road is one of the omissions in Dutch era where the local resident uses it to access other regions. On 1975, this waterfall is opened as tourist destinations in north part of Bali .

Since it is appointed as a tourist destination in Bali, many tourists from domestic and foreign countries visits this waterfall and Bali North Tour is one of the famous tours in Bali visit this place.

This is the most famous waterfall in Bali.  The Gitgit Waterfall is on the edge of the Highway Denpasar – Bedugul – Singaraja .The Waterfall is 300 meters above sea level and often visited by tourists, it can get very busy.

The Gitgit Waterfall is located in the village Gitgit, Sukasada District, Buleleng regency. Waterfall Gitgit is located between villages and clove plantations. All 3 series of cascades are on the same watershed. They have separate parking spots, all close together. Roads and stairs are well maintained, making it easier to visit.

On the side of the road that passes the waterfall, there are several souvenir shops. Along the way you also see many small children who try to sell beads. You will also find a lot of guides trying to show you the way!

The Gitgit waterfall consists of several waterfalls with different shapes and heights. Halfway along the way the scene changes and on both sides you can see coffee and clove trees. It is a refreshing experience to walk in this quiet area where the birds take turns to sing.

The air is cool and gradually gets colder when you approach the waterfall. A short distance from the waterfall, the fine water spray will cool your body. Sometimes the atmosphere will become misty.

There are beautiful waterfalls in Bali that deserve your visit. Some are easy to reach, others are more challenging. Most waterfalls are in the mountains in North Bali. 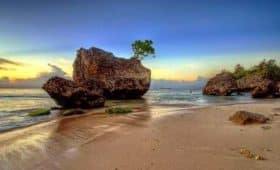 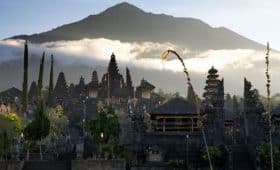